SSL Venture Capital Jamaica Limited (SSLVC) reported revenues of $58.56 million compared to $727,204 in the prior year. For the quarter, revenue amounted to $58.51 million (2017: $352,864). Management highlighted that, “revenue was generated via the company’s Venture Capital operations. In keeping with our investment strategy, SSL Ventures purchased equity stakes in early stage companies that showed strong growth potential to enable an exit on investment via an IPO or Trade Sale within a 3 year time horizon. The company’s revenue growth for the quarter ended September 30, 2018 was largely driven by the company’s equity investments in Bar Central Limited, Blue Dot Intelligence Limited and Muse 360 Integrated Limited.”

Sponsorship income for the nine months amounted to $1.61 million relative to $195,240 twelve months earlier. The company booked $19.74 million for ‘Realized income due to AP and loan written off’ in 2018 compared to nil in 2017.

The company mentioned that, “SSL Ventures will continue to work with the three aforementioned companies to execute its mandate to realize shareholder returns via an exit through an IPO or private sale within three years. We are also working towards making investments in other private companies that show great promise in regard to revenue growth and profitability.”

Bar Central Limited is a distribution and branding company that experienced revenue growth largely from the expansion of the fleet to further its distribution network as well as the addition of several high margin products to the company’s portfolio. The company also continues to grow its marketing execution line of business through branding of various bars and wholesale locations island wide.

Muse 360 Integrated Limited is a full service marketing agency and content production company. The company continued to expand the number of brands under management ultimately translating to an increase in revenue. 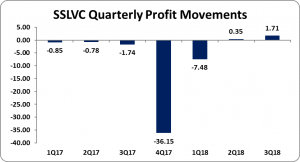