Net profit attributable to stockholders closed the six months period at $7.48 million versus a loss of $782,363 reported for the prior year. Management noted that, “It should be mentioned at this time that the comparative would not have reflected the three (3) Investment Holdings (Bar Central Limited, Blue Dot Data Intelligence Limited and Muse 360 Integrated Limited) which were acquired in the second half of 2018.”

Management noted, “SSL Ventures continues to work with the three aforementioned companies to execute its mandate to realize shareholder returns via an exit through an IPO or private sale within three years. This quarter has been focused on improving operations and building intrinsic value for the companies.” 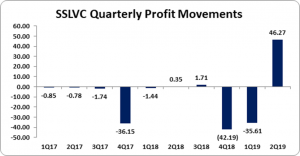