SSL Venture Capital Jamaica Limited (SSLVC), for the three months ended September 30, 2020, reported revenues of $18.25 million compared to $51.03 million in the prior year.

Other operating income closed at $48,882 (2019: $322,591). In addition, administrative expenses of $21.66 million was booked for the quarter compared to $37.90 million documented for the similar quarter in the previous year. Management noted, “For this quarter, the Group was able to realise savings from the cost containment and efficiency improvement measures implemented toward the end of the last financial year.”

In addition, SSLVC reported loss before taxation of $23.53 million for the quarter compared to loss before taxation of $25.69 million documented in the prior year’s quarter.  Taxes credit amounted to $3.79 million (2019: nil), as such, SSLVC closed the quarter under review with net loss of $19.74 million relative to net loss of $25.69 million booked in the prior year’s quarter.

SSLVC noted, “The September 2020 results is trending in the right direction despite the challenges brought on by COVID-19. The group is now realising benefits from the financial and operational efficiency improvements implemented in the prior year. It is our hope that this trend will continue. The executive management along with the Board of Directors continue to review the company’s strategic direction and will communicate with shareholders those decisions as they occur.” 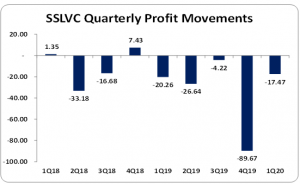