Management noted, “these reduced losses when compared to prior periods were primarily driven by the write-off of payables balances owed to parent company of $96.4M relating to Bar Central Limited. Management was not able to secure a sale for Bar Central Limited and as such took the decision to write-off intercompany balances in order to facilitate wind up of the subsidiary.” 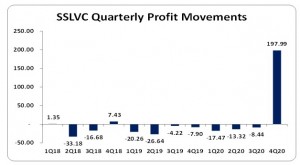