Revenues from the company’s segments were as follows:

Direct expenses recorded an increase to close the period under review at $7.83 billion when compared to $7.40 billion for the same period in 2019. As such, gross profit for the period improved 21% to $2.30 billion (2019: $1.90 billion). Management noted the increase was, “attributable to the higher net sales for Lotteries, PIN codes and Sports Betting.”

Selling, general and administrative expenses grew by 37% for the period to $1.30 billion (2019: $948.45 million), while SVL booked other income of $64.29 million relative to other expenses of $10.20 million in the prior comparable period. Management noted, “the increase in the Group’s operating expenses of $350 million can be attributed to inclusion of PostToPost Betting, which was not a subsidiary of the Group in Q1 2019 and the activities associated with our planned acquisitions and expenses that support the increased revenues. We continue to exercise due care in the management of the operating expenses.”

In addition, SVL stated that, “the Group’s operation has been negatively impacted by COVID-19 during the first quarter and will also experience challenges in the upcoming quarter as a result of closures affecting the horse racing operations, gaming lounges and places of entertainment. The Group looks forward to the continuation of improvements and the launch of key initiatives through our retail channel, the continued build out of our business in Guyana and the improvement in the horse racing product through technological and new product initiatives. Our Lotter portfolio continues to be a primary focus while improving and strengthening our internal infrastructure and capabilities.” 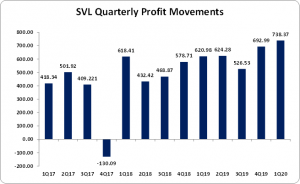