Operating expenses grew 8% for the period to $2.01 billion (2018: $1.86 billion), while recording ‘Other losses’ of $16.03 million relative to ‘Other income’ of $91.51 million for the prior period in 2018. For the quarter, operating expenses amounted to $1.06 billion versus $954.18 million booked in the previous comparable quarter. The Company highlighted that, “the increase is attributed to the activities associated with the launch of Mobile Gaming in March 2019. This expenditure is expected to have a positive return overtime in the form of sales from new segments on the platform.”

SVL noted that, “The Guyana operation’s product suite is currently being built out, and the business is expected to show positive returns by the end of 2019. Our current focus is investing in the right product set in Guyana, with effective retail distribution which we can build on.”

In addition, Management mentioned that, “the Group looks forward to the second half of the year as we maintain the positive momentum created in the first half. Through initiatives such as our acquisition of Post to Post betting, the continuation of improvement of the JustBet product through execution of various initiatives, driving various promotions and initiatives through our retail channel, the continued drive to grow our mobile channels through increased registration across our gaming segments, and the preparation to enter the online gaming landscape, the continued build out of our business in Guyana and the improvement to the horseracing product through technological and new product initiatives. Our Lottery portfolio continues to be a primary focus and improving and strengthening our internal infrastructure and capabilities.” 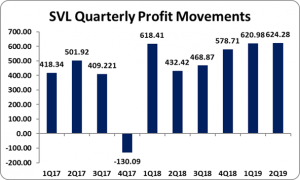