Management indicated, “During the quarter the company saw increased business in most of our major service categories including infrastructure Management, IT Security Services, Voice/ PBX Systems, Cloud Services and Consulting with new contracts with new and existing customers. We continue to have increased PBX business, however new customers have preferred to acquire these systems under a “hardware-as-a-service” model, where tTech provides and maintains the central switch under a predictable payment model contributing positively to our important monthly recurring revenue growth. We have had a good second quarter and with the expanded and re-energized sales team leveraging the momentum built up in Q1 closing more of the opportunities. We anticipate continued growth and performance in the second half of 2018.” 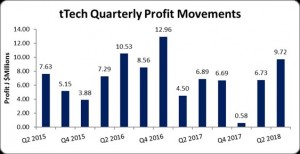