Operating profit year to date totaled $9.78 million, up from $5.83 million booked for the same period in 2020. Operating profit for the quarter closed at $4.88 million compared to $4.67 million reported for the three months ended June 30, 2020. TTECH booked finance income for the six months of $992,000 compared to $1.09 million recorded in the prior year’s corresponding quarter.

tTech noted, “tTech has now entered phase two of the Junior Market incentive scheme where 50% of the normal tax rate equivalent to 12.5%, now applies to our profits during the second five years of listing on the Junior Market of the Jamaica Stock Exchange; after which the normal rate of 25% will apply.  We are eligible for the Employment Tax Credit which will further reduce the rates payable to 8.75% for the next 5 years and 17.5% thereafter.”

Furthermore, “during the period under review, tTech continued to benefit from the momentum in Q1 with the addition of several Cybersecurity related projects to our roster. This is because we have been relentless in our Cybersecurity awareness activities which has driven some entities to act. We also continued our Data Protection as a Service campaign which has strengthened our pipeline. Also contributing positively was our highly successful business technology event, TechCon, that was held virtually this year on May 18‐19,” as per tTech. 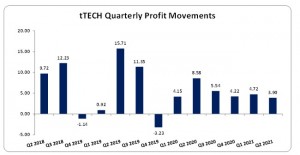