Managers stated, “tTech had a promising start to 2020 as marketing activities during the second half of 2019 had begun to bear fruit with several opportunities being converted to customers in the first quarter. However, in March 2020 COVID‐19 was declared a global pandemic and conditions changed dramatically. Fortunately, because of investments made previously, tTech was able to respond immediately to the call by the government to implement Work from Home and have our team members work remotely.  At the same time we were kept very busy helping our customers to implement the technologies needed for their staff to operate remotely.” 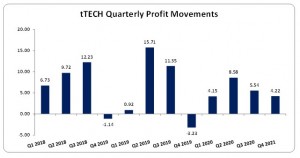