The earnings per share (EPS) for the quarter amounted to $0.02 compared to $0.06 reported in 2021. Loss per share for the period totalled $0.10 (EPS 2021: $0.21). The trailing twelve months loss per share amounted to $0.14. The number of shares used in our calculations is 106,000,000 units. The company’s stock price closed the trading period on November 2, 2022 at $3.29.
The Company noted, “tTech completed one its largest cybersecurity projects to date, the implementation of a leading Endpoint Detection and Response (EDR) solution with artificial intelligence (AI) and machine learning (ML) capabilities across multiple organizations and geographies. We have been on a push to improve the Cybersecurity protection of all our customers. We have been on a campaign to inform and educate customers and prospects; our main message during the period was to replace or upgrade all antivirus with faster and smarter AI-powered prevention and autonomous detection and response solutions. These advanced cybersecurity solutions seamlessly combine automation with both AI and ML to detect and remediate modern attacks in real-time, at machine speed, and without extra intervention.” 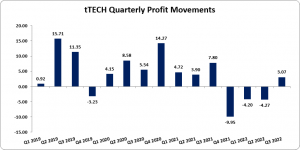