The U.S. Census Bureau and the U.S. Bureau of Economic Analysis, through the Department of Commerce, advised that the goods and services deficit for November 2017 was $50.5 billion compared  to $48.9 billion, up $1.6 billion. November exports increased 4.4 billion to totaled $200.2 billion, while imports totaled $250.7 billion, $6.0 billion above October 2017 imports.

Exports of goods amounted to $136.6 billion in November due t o a $4.4 billion increase. Impacting the movement in goods exported was a $2.5 billion increase in ‘capital goods, while ‘automotive vehicles, parts, engines’ and ‘consumer goods’ grew $1.0 billion and $0.7 billion respectively. Exports of services increased $0.1 billion to $65.7 billion due to an increased in ‘financial services’ and ‘other business services’. ‘Maintenance and repair services declined $0.1 billion during the month.

Imported goods rose $6.0 billion in November 2017 to $205.5 billion, due to a $2.4 billion increase in ‘consumer goods’ imported. ‘Industrial supplies and materials’ and ‘capital goods’ both increased $2.2 billion and $1.6 billion respectively. Import of services slid less than $0.1 billion to $45.3 billion in November, due to a decrease in ‘transport’ of $0.2 billion. ‘Travel (for all purposes including education)’ and ‘Charges for the use of intellectual property’ increased during the month. 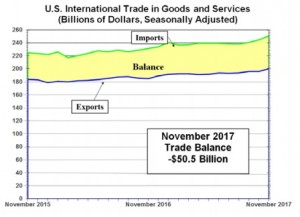 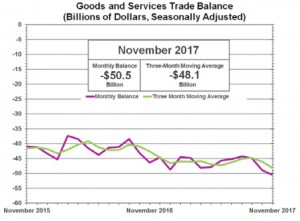