Americans applying for jobless claims rose for the second straight week, climbing 12,000 compared to data released for the week ended July 18, 2020. Initials claims for the week ended July 25 amounted to 1,434,000, while the 4-week moving average was 1,3668,500, a growth of 6,500 from the prior week. The report hints that economic growth could be stalling in late July.

The advance seasonally adjusted insured unemployment rate stood at 11.6% for the week ending July 18, Notably, the preceding week’s rate was unrevised. The number of people already collecting economic benefits, known as continuing claims rose by 867,000 to 17.06 million. These claims are reported with a one-week lag. 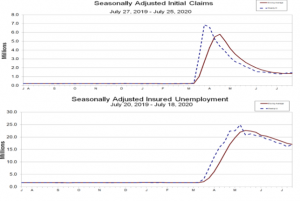 Based on the unadjusted advance estimate, there were 1,205,871 actual initial claims under state programs in the week ending July 25, a decrease of 171,054 (or -12.4%) from the previous week. The seasonal factors had anticipated a decline of 180,650 (or -13.1%) from the previous week. Moreover, for the week ending July 25, 50 states observed 829,697 initial claims for Pandemic Unemployment Assistance.

During the week ending July 18, the advance unadjusted insured unemployment rate stood at 11.6%, a 0.4 percentage point increase relative to the previous week. The advance unadjusted number for persons claiming UI benefits in state programs rose by 536,757 (or 3.3%) to 16,881,463 from a week earlier. The seasonal factors had expected an decrease of 323,018 (or -2.0%) from the previous week. 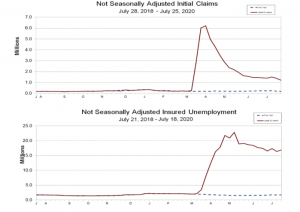 For the week ending July 18, 1,393 former Federal civilian employees claimed for UI benefits, a decrease of 339 relative to the previous week, whereas 1,130 newly discharged veterans (-115) claimed for benefits.

However, for the week ending July 11, 14,425 former Federal civilian employees claimed for UI benefits, a decrease of 673 relative to the previous week, whereas 13,707 newly discharged veterans (-345) claimed for benefits.