The latest U.S. payroll data from the Bureau of Labour Statistics indicated that the U.S. economy added 220,000 jobs while the unemployment rate was little changed at 4.4% for the month of June. The sectors see increases were health care, social assistance, financial activities and mining. 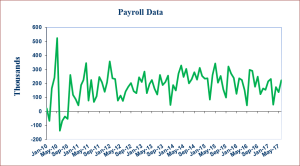