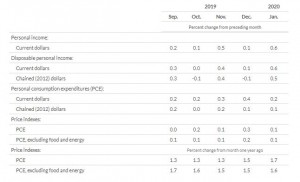 The growth in personal income in January was primarily attributed to increases in compensation of employees and social security benefit payments (related to annual cost of living adjustments), and other government social benefits to persons, which includes the Affordable Care Act refundable tax credit.