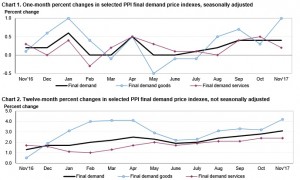 Final demand services: An advance of 0.2% was observed in November 2017. The growth in the index less trade transportation, and warehousing moved up 0.4%. Prices for final demand transportation and warehousing services climbed 0.6 percent. Conversely, margins for final demand trade services decreased 0.3 percent. The movement in November according to According to the Bureau of Labor Statistics was due to, “prices for loan services (partial), which increased 3.1 percent. The indexes for traveler accommodation services; health, beauty, and optical goods retailing; food and alcohol retailing; chemicals and allied products wholesaling; and apparel, footwear, and accessories retailing also moved higher. In contrast, margins for machinery and equipment wholesaling declined 1.9 percent. The indexes for fuels and lubricants retailing and for bundled wired telecommunication access services also fell.”