During the week ending September 12, the advance unadjusted insured unemployment rate stood at 8.4%, a 0.1 percentage point decline relative to the previous week. The advance unadjusted number for persons claiming UI benefits in state programs fell by 176,510 (or -1.4%) to 12,264,351 from a week earlier. DOL also reported, “The seasonal factors had expected a decrease of 9,932 (or -0.1 percent) from the previous week. A year earlier the rate was 1.0 percent and the volume was 1,399,601.” 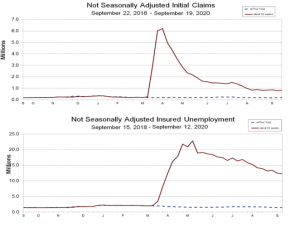 For the week ending the 12th of September, 954 former Federal civilian employees claimed for UI benefits, an increase of 1 relative to the previous week, whereas 794 newly discharged veterans (a decline of 91) claimed for benefits.