During the week ending July 25, the advance unadjusted insured unemployment rate stood at 10.8%, a 0.7 percentage point decrease relative to the previous week. The advance unadjusted number for persons claiming UI benefits in state programs fell by 965,711 (or -5.7%) to 15,849,488 from a week earlier. The seasonal factors had expected a decrease of 135,606 (or -0.8%) from the previous week. 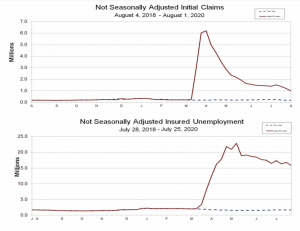 For the week ending July 25, 1,403 former Federal civilian employees claimed for UI benefits, an increase of 10 relative to the previous week, whereas 1,029 newly discharged veterans (-101) claimed for benefits.

However, for the week ending July 18, 16,170 former Federal civilian employees claimed for UI benefits, an increase of 1,745 relative to the previous week, whereas 16,271 newly discharged veterans (+2,564) claimed for benefits.