According to England’s ONS (Office of National Statistics) the Consumer Prices Index including owner occupiers’ housing costs (CPIH) rose to 9.2% as at December 2022 while the Consumer Prices Index (CPI) rose to 10.5%. CPIH & CPI in November 2022 was 9.3% & 10.7% respectively. Consumer price inflation estimates suggested that the October rate was the highest observed in over 40 years. It was also noted that, “In the most recent month however, the CPIH annual rate was equal to the rate recorded just over 30 years earlier, between September and December 1990.”

The largest downward contribution to the change in both the CPIH and CPI annual inflation rates between November and December 2022 came from transport (particularly motor fuels), clothing and footwear, and recreation and culture, with rising prices in restaurants and hotels, and food and non-alcoholic beverages making the largest partially offsetting upward contributions. 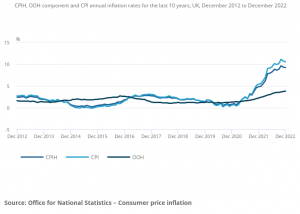 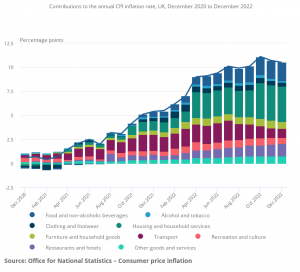