Unemployment rate rose in the majority of EU regions in 2020

In 2020 the unemployment rate of people aged 15-74 increased in the majority of the Nomenclature of Territorial Units for Statistics (NUTS 2) regions of the EU. It continued to vary widely across the EU regions, with the lowest unemployment rate recorded in the Polish region Wielkopolskie (1.8%), in two Czech regions: Central Bohemia (1.9%) and South-West (2.0%), followed by three further Czech regions: Prague, North-East and South-East (all 2.3%).

At the opposite end of the scale, the highest unemployment rates were registered in the Spanish autonomous cities of Ceuta (24.5%) and Melilla (23.7%) and two further Spanish regions: Canary Islands (22.6%) and Andalusia (22.3%).

This information comes from regional data on the labour market in 2020 published by Eurostat today. The article presents only a handful of findings from the more detailed Statistics Explained article.

The majority of the EU regions registered an increase in their unemployment rate although to a varying extent. Among EU regions with available data*, the highest increase was recorded in the Greek region of Crete (+5.6 pp compared with 2019), followed by the Balearic Islands (+4.3 pp) in Spain, the Ionian Islands (+3.6 pp) and South Aegean (+3.0 pp) in Greece as well as Champagne-Ardenne (+2.6 pp) in France.

In contrast, less than one-third (31%) of the EU regions saw their unemployment rate fall in 2020. The highest decreases were registered in the Greek region of West Macedonia (-4.9 pp compared with 2019) and an overseas region of France Réunion (-3.9 pp), followed by the Spanish autonomous city of Melilla (-3.3 pp) and two further overseas regions of France: French Guiana (-3.2 pp) and Guadeloupe (-3.1 pp). 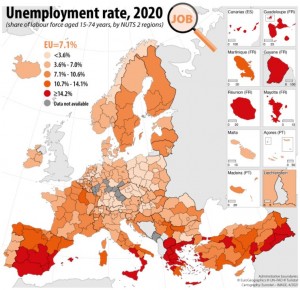