United States Inflation rate in line with analyst estimates of 6.5% in December 2022

According to a study released today by the U.S. Bureau of Labor Statistics, the Consumer Price Index for All Urban Consumers (CPI-U) decreased 0.1 percent on a seasonally adjusted basis in December after rising 0.1 percent in November. Before seasonal adjustment, the all items index rose 6.5 percent over the previous 12 months.

Gasoline was by far the biggest factor in the monthly decline in all categories, more than offsetting rises in the indexes for shelter. The food index climbed by 0.3% during the course of the month, while the index for food consumed at home increased by 0.2%. Other significant energy component indices climbed throughout the course of the month, while the energy index fell by 4.5 percent as the gasoline index fell.

After increasing 0.2 percent in November, the index for all products excluding food and energy increased by 0.3 percent in December. The housing, household goods and services, automobile insurance, leisure, and clothing indices all saw increases in December. Among the indexes that fell over the course of the month were those for used vehicles and trucks and airline tickets.

The increase in the all-items index for the 12 months ending in December was only 6.5 percent, which was the smallest 12-month increase since the 12 months ended in October 2021. Over the past 12 months, the index for all items minus food and energy increased by 5.7%. The food index grew 10.4% percent over the past year, while the energy index increased 7.3%; all of these increases were lower than for the 12-month period ending November.

The fresh fruit index, on the other hand, had a monthly decline of 1.9 percent, while the fruits and vegetables index dropped by 0.6 percent. While the index for cereals and bakery goods remained steady in December, the index for dairy and associated items fell by 0.3%.

Over the previous 12 months, the index of food at home increased by 11.8 percent. The index for breakfast cereals and bread goods increased 16.1% in one year. Meats, poultry, fish, and eggs had rises of 7.7%, while dairy and allied goods saw increases of 15.3%. These were the remaining major grocery store food groups.

All items less food and energy

In December, after increasing by 0.2 percent in November, the index for all products except food and energy increased by 0.3 percent. The shelter index increased again this month, reaching 0.8 percent overall. Both the owners’ equivalent rent index and the rent index increased by 0.8 percent during the course of the month. Following a decrease of 0.7% in November, the index for lodging away from home jumped by 1.5% in December.

The monthly increase in the index for all products except food and energy was mostly driven by the shelter index, while the other components varied between gains and losses. The index for household operations and furnishings rose by 0.3 percent during the month, while the index for motor vehicle insurance jumped by 0.6 percent and the index for entertainment increased by 0.2 percent. In December, both the apparel and education indices improved by 0.5 and 0.3 percent, respectively.

Over the previous 12 months, the index for all products minus food and energy increased by 5.7%. Over the past year, the index for shelter grew by 7.5%, making up more than half of the overall increase in all categories except food and energy. Other indexes that have seen significant growth in the past year include home operations and furnishings (up 6.7%), health care (up 4.0%), new cars (up 5.9%), and leisure (up 5.1%). 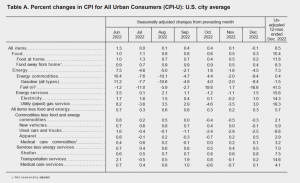