The seasonally adjusted Producer Price Index for final demand gained 1.4% in March 2022, according to the US Bureau of Labor Statistics. Following gains of 0.9% in February and 1.2% in January 2022. Final demand prices increased 11.2% for the 12 months ended March 2022 on an unadjusted basis, the largest increase since 12-month data were first calculated in November 2010. 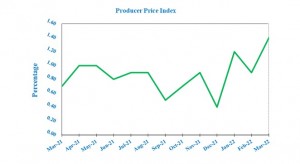