In March, total nonfarm payroll employment increased by 431,000. The unemployment rate ticked down by 0.2% to 3.6% which is 6.0 million persons in March 2022.  Notably, these measures are little different from their values in February 2020 (3.5% and 5.7 million, respectively), prior to the coronavirus (COVID-19) pandemic. The job growth was spread across various industries, with leading gains in leisure and hospitality, professional and business services, retail trade, and manufacturing.

The labour force participation rate for March 2022 stood at 62.4%, while the employment-population ratio changed little to 60.1%. Nonetheless, persons employed part-time for economic reasons stood at 4.2 million in March. Based on BLS assessment, “these individuals, who would have preferred full-time employment, were working part time because their hours had been reduced or they were unable to find full-time jobs.”

Total nonfarm payroll employment rose by 431,000 in March but is down by 1.6 million, or 1%, from pre-pandemic level in February 2020. Job growth averaged 562,000 per month in the first quarter of 2022. In the pass month professional and business services added 102,000 jobs in March 2022. Employment in leisure and hospitality continued to trend up in March (+112,000). Retail trade added 49,000 over the month. Additionally, employment in social assistance added 25,000 and construction added 19,000. Other sectors such as health care (+8,000), Financial activities (+16,000), and Manufacturing (+38,000) added to total employment. While employment in transportation and warehousing reduced by 1000 also, there was little changed shown in mining, wholesale trade, information, other services, and government. 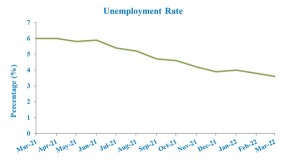