Interest income fell by 0.6% to $731.26 million relative to 2017’s $735.67 million. Interest income for the quarter amounted to $208.02 million, 17% above the $117.77 million booked for the similar quarter of 2017. Additionally, other interest income for the year was realized at $7.10 million (2017: nil). Management noted, “this growth in revenue was attributable to a 65% growth in net fees and commissions to $826.7 million consistent with your Company’s strategic objectives of growing our Capital Markets and Asset Management Units. Our Capital Markets Unit arranged transactions valued at over $19.3 billion in line with our commitment to provide creative finance solutions to grow business.”

Gain from investment activities totalled $182.8 million for the twelve months relative to the previous year’s income of $193.08 million.

Staff costs amounted to $349.07 million in contrast to $292.33 recorded in 2017. Total other operating expenses for the year amounted to $313.23 million compared to $206.30 million booked in the previous year. Management indicated, “Operating expenses, excluding the provision for credit losses on financial assets, totalled $662.3 million, representing an increase of 33% when compared to the prior year, due mainly to our investment in human resources as well as the implementation of our new Investment Management System (OPICS), which will allow us to seamlessly and efficiently launch various other assets management products. Our efficiency ratio ended the year at 50.7% from 51.6% for the corresponding prior year period.”

Tax charges for the year amounted to $141.44 million, a 16% increase when compared with $121.52 incurred by VMIL for 2017. As a result, the net profit for the year amounted to $397.60 million relative to a profit of $346.30 million. Net profit for the quarter amounted to $156.60 million compared to a $72.86 million for 2017. VMIL noted, “as previously reported in our Second and Third Quarter releases, net income was negatively impacted by a $105.5 million provision for expected credit losses in respect of Government of Barbados global bonds (GoB bonds) held by our wholly-owned subsidiary, Victoria Mutual Wealth Management Limited. If it had not been for the credit loss provision on the GoB bonds, net profit for 2018 would have been $503 million, being 45% over the comparative 2017 period.” 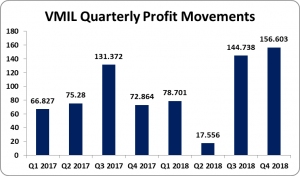