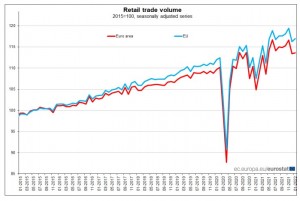 Among the Member States for which data are available, the largest annual decline in total retail trade were recorded in Finland (-2.4%). The highest increases were observed in Slovenia (+32.3%), Poland (+19.5%), and Lithuania (+18.2%).