Volume of retail trade increased by 0.3% in both the euro area and the EU 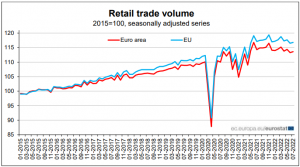