West Virginia Had the Fastest GDP Growth in the First Quarter 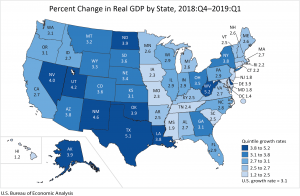 • The leading contributors to the rise in the real GDP nationally were finance and insurance, retail trade, and health care and social assistance which increased 9.5%, 11.9% and 6.2% respectively.
• Mining for the nation was the leading contributor to growth in several states including West Virginia, Texas and New Mexico which are the fastest growing states. Tis industry gre 26.5% relative to an increase of 38% in the fourth quarter.
• For the nation, the government sector fell 1.1 % and slowed growth in most states partially attributable to federal government shutdown in January 2019.