Wigton Windfarm Limited, for the six months ended September 30, 2020, reported sales of $1.36 billion, a 7% decline on the $1.47 billion reported in the prior year. Revenue for the quarter declined 3% to $612.85 million (2019: $632.34 million). WIG noted that, “the decrease in revenue was due to the decrease in sales of electricity which resulted from lower production in the current reporting period.”

Other income amounted to $108.52 million, a 8% decline when compared to $118.22 million in the same period last year. General administrative expenses increased for the period amounting to $201.80 million relative to $181.34 million documented in the same period in the previous year. 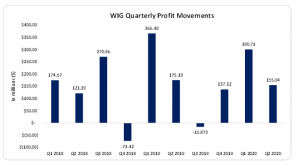