Wigton Windfarm Limited, for the six months ended September 30, 2021, reported sales of $1.21 billion, an 11% decline on the $1.36 billion reported in the prior year. Revenue for the quarter declined 7% to $572.56 million (2020: $612.85 million). Management noted that, “this change was largely due to (i) the lower level of production, and (ii) the approximate 50% rate reduction in United States dollars terms for Wigton Phase II which had an overall impact on sales revenue in Jamaican dollars of $81.5 million or 12.2%.”

General administrative expenses increased for the period amounting to $316.05 million relative to $201.80 million documented in the same period in the previous year. This was “as a result of increased maintenance costs, salaries and insurance premiums. In terms of increased maintenance, a number of these activities were carried over from previous periods due to supply chain delays in spare parts arrival,” as per Management

WIG noted that, “these decreases were as a result of lower levels of production due mainly to lower wind regime over the period, unavailability of some equipment which were undergoing maintenance and the impact of the rate reduction for Wigton Phase II. While the Company benefited significantly from a front-loaded rate regime in respect of Wigton Phase II and was able to pay down its debts by 10.6% of total project cost for Wigton Phase II and accumulate the 20% equity requirement for Wigton Phase III, the revenue shortfall from the lower rate which took effect during this period should be buttressed through core business initiatives being undertaken by the Company. Accordingly growing the business by investing in new business opportunities, being ready to respond to any new calls for additional renewable energy to the national grid, and continuing to prudently manage major expenses are among the core focus areas of management.”

Management stated, “The average plant availability rate was approximately 87.6% during the six months reporting period. This was below the projected target of 93.3% because of wind turbines being out of operation during the period to facilitate major maintenance activities.” 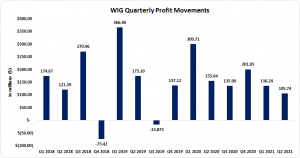