Wigton Windfarm Limited, for the six months ended September 30, 2019, reported sales of $1.47 billion, a 2% decline on the $1.49 billion reported in the prior year. Revenue for the quarter declined 10% to $632.34 million (2018: $705.64 million). WIG noted that, “the decrease in revenue was directly related to a 10.7% decrease in production in the current reporting quarter as a result of lower wind regime. Availability of the wind turbines was 8.2% better than the SPLY. Major repairs and maintenance were conducted during this quarter to capitalize on the low wind regime during the quarter.”

Other income amounted to $118.22 million, a 32% decline when compared to $174.45 million in the same period last year. General administrative expenses increased for the period amounting to $181.34 million relative to $163.24 million documented in the same period in the previous year.

Finance expense trended downwards from $752.56 million in 2018 to $301.72 million in 2019. Management stated that, “The main contributor to the decrease was a reduction in finance expense of $240.5 million or 60.9% as a result of lower exchange losses.” Management also noted, “ On December 14, 2018, WWFL refinanced its United States Dollar Loans totaling US$49.2 million. The loans were refinance through private placement of bonds that raised J$6,348,586,690 to repay the loans to the Petrocaribe Development Fund (PDF) of US$49.2 million.” 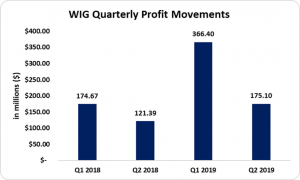