Wisynco Group Limited (WISYNCO), for the six months ended December 31, 2019, reported total revenue of $17.11 billion, a 28% or $3.76 billion increase when compared with the $13.35 billion reported for the same period in 2018. Total revenues for the quarter amounted to $8.49 billion reflecting an increase of 25% over the $6.80 billion achieved in the corresponding quarter of the previous year. Management noted, “We had growth in all major product categories notwithstanding tempered demand for some products at the start of the 2nd Quarter due to rains which continued into early October.”

Finance income for the period amounted to $75.27 million, up 78% from the $42.20 million reported for the corresponding period in 2018. Finance costs decreased 48% to $81.33 million for the period from $154.98 million for 2018.  The company noted, “Included in Finance costs are foreign exchange losses of approximately $68 million as a result of the revaluation of the JAD.”

Management noted, “Due to the closure of the Styrofoam plant with effect December 31, 2019, in accordance with the Government of Jamaica’s ban on production and sale of Styrofoam in Jamaica effective January 1, 2020, there was a one-off loss accounted for and reported in this interim report as discontinued operations which impacted our Net Profit by $262 million.” 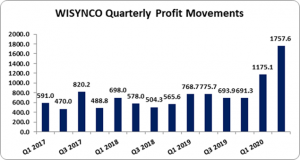