Wisynco Group Limited (WISYNCO) reported total revenue of $9.09 billion for the first quarter ended September 30, 2019, a 35% or $2.33 billion increase when compared with the $6.75 billion reported for the same period in 2018. Management noted, “We had very strong growth in our core beverage brands as a result of increased demand and improved efficiencies in plant productivity.  In addition, the strategic alliances between Worthy Park (WP) and St Mary’s Snacks along with increasing revenue from other portfolios contributed to drive revenue to new highs.”

Cost of sales for the period amounted to $5.74 billion, up 37% relative to $4.18 billion reported in last year. Consequently, gross profit rose 30% to close at $3.35 billion compared to the $2.58 billion for the same period a year earlier.

As such, WISYNCO booked a 53% increase in operating profit to $1.33 billion when compared to $868.69 million in the previous corresponding period.

Net profit attributable to shareholders of $1.18 billion (2018: $768.66 million) was posted for the first quarter, representing a 53% increase year over year. 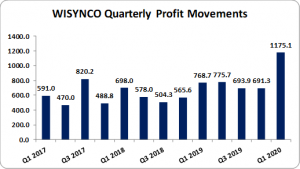