According to the latest report published by Bureau of Economic Analysis, based on the operations and finances of U.S. parent companies and their foreign affiliates, worldwide employment by U.S. multinational enterprises (MNEs) increased 0.4% to 42.5 million workers in 2017 from 42.3 million in 2016. 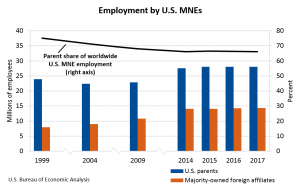 Total private industry employment in the United States, was accounted for by 22.0 % of U.S. parents.  Manufacturing and retail trade had the largest employment by U.S. parents. While, employment abroad by MOFAs was largest in China, United Kingdom, Mexico, India, and Canada.

With respect to the activities of U.S. MNEs, worldwide current-dollar value added increased 2.0% to $5.3 trillion. Value added by U.S. parents, a measure of their direct contribution to U.S. gross domestic product, was almost unchanged at $3.9 trillion, representing 22.9 % of total U.S. private-industry value added. MOFA value added rose to $1.4 trillion. Moreover, the largest value added by MOFAs was in the United Kingdom, Canada, and Ireland.

Worldwide research and development expenditures of U.S. MNEs climbed 3.3 % to $354.9 billion. U.S. parents accounted for expenditures of $298.3 billion and MOFAs for $56.6 billion. 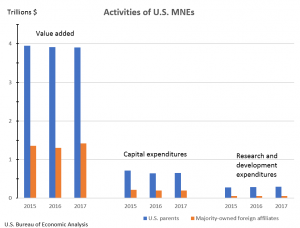