Operating profit for the period amounted to $406.85 million compared to an operating loss of $1.59 billion booked in 2020.

Loss due to dilution of associate amounted to $233.09 million for the nine months in contrast to a loss of $388.15 million last year.

Management highlighted that, “The Group’s results were underpinned by a divestment of hotel assets from the sale of Playa shares and Jewel Grande Montego Bay operations coupled with diversification of financial investments portfolio. This shows a commitment and willingness to adjust our business model amidst a depressed economic environment.” 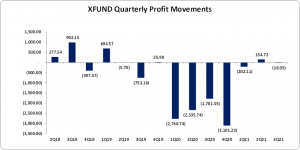