Net capital loss on financial assets and liabilities amounted to $144.07 million, relative a gain of $68.94 million booked the corresponding period in the prior year.

Hotel Revenue for the six months period decreased by 46% to $1.78 billion (2019: $3.33 billion), the Company noted that, “the outbreak of COVID-19 globally led to a pause in business activities at our local hotel, Jewel Grande Montego Bay (JGM) and those owned by Playa Hotels & Resorts N.V. (Playa) since mid-March. JGM resumed full operations on July 1st while Playa began re-opening on a phased basis. The reopening of the tourism sector has improved the outlook for our business activities.”

As a result, operating loss amounted to $634.26 million, relative to a profit of $264.35 million in the previous comparable period.

Share of loss from associate accounted for using the equity method for the period amounted to $1.93 billion relative to a profit of $878.56 million booked the prior year. Also, the Company reported a loss impairment of investment in associate of $5.20 billion (2019: nil) and a loss from dilution of associate of $380.75 million (2019: nil). Management noted, “with uncertainty surrounding patrons’ confidence in leisure and travel activities, a non-cash impairment charge of $5.20 billion was recorded on our investment in associated company, Playa. On June 12, 2020, Playa announced the issue of 4.88 million ordinary shares priced at U$4.10 per share and additional debt financing of US$204 million. This transaction led to a 0.56% reduction in X-Fund’s holdings and the Group recorded a loss on dilution of $0.38 billion. The shareholders of X-Fund Group have recorded $3.40 billion in relation to the impairment charge and the dilution of interest.” 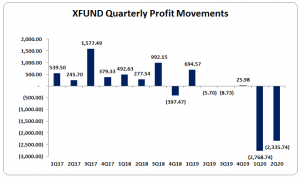