Sagicor Real Estate XFUND Limited, for the three months ended March 2020, reported total revenue of $1.34 billion relative to $1.78 billion recorded in 2019, a 25% decline year over year. XFUND mentioned that, “Hotel revenue had been on an upward trend until the latter part of the quarter, when the Group began to experience a significant reduction in demand for travel and leisure activities. Our direct hotel operations segment which comprised DTO and our local hotel contributed $1.56 billion, 11% down on prior year. In a time when the tourism sector is reporting significant losses, our hotel business generated net profits of $0.06 billion.”

Hotel revenue for the three months decreased to $1.56 billion in 2020 versus $1.73 billion in 2019, a 10% decline year over year. Net capital loss for the period under review amounted to $220.82 million compared to net capital gains of $41.98 million documented in the prior comparable period. Also, net investment income closed the first quarter at $5.77 million (2019: $5.28 million) reflecting a 9% increase when compare to the corresponding quarter.

Operating expenses fell 4% to $1.47 billion compared to $1.54 billion in the prior corresponding period. Of this:

Hotel expenses declined to $1.07 billion, down 11% when compared to $1.21 billion in the prior corresponding period.

Consequently, operating loss amounted to $131.13 million versus operating profit of $242.52 booked in the previous corresponding period.

Impairment of investment in associate closed the period at $3.88 billion (2019: nil). While, share of loss from associate accounted for using the equity method amounted to $474.05 million relative to a profit of $856.98 booked the prior year. Management noted, “The uncertainty surrounding the timing for reopening of the tourism sector and the current reduction in business activities led to a non-cash impairment charge of $3.88 billion on our investment in associated company Playa.”

The company mentioned, “The Group started the year on a promising growth trajectory. However, in March the World Health Organization (WHO) declared the outbreak of COVID-19 a pandemic. To contain the outbreak, travel restrictions were imposed globally which led to a sharp decline in international tourist travel. In response to this, our local hotel and those owned by our partner, Playa Hotels & Resorts N. V. (Playa) suspended operations. DoubleTree by Hilton (DTO) remains open but is operating with reduced occupancy. The unprecedented downturn in business activities has led to a reduction in earnings for Q1 2020” 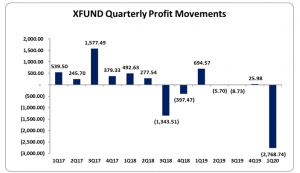