Sagicor Real Estate XFUND Limited (XFUND), for the year ending December 31, 2021, reported total revenue of $5.79 billion relative to the $2.58 billion reported in 2020, a 125% increase year over year. XFUND’s Board of Directors stated, ‘Sagicor Real Estate XFund continued to show improvement in its financial performance, consistent with the momentum within the global economy. Additionally, the improved results reflect the improvement in theme park attendance in Orlando USA as the industry emerged from the COVID-19 shutdowns in 2020.’ According to Florida officials, visitor arrivals to the state above pre-pandemic levels is being experienced. Total Revenue for the quarter totaled $1.88 billion compared to $655.05 million in 2020.

Total Comprehensive Income for the year amounted to $978.05 million relative to a Loss of $15.11 billion booked last year.

Management highlighted that, “The company’s results were underpinned by a divestment of hotel assets from the sale of Playa shares and Jewel Grande Montego Bay operations coupled with diversification of financial investments portfolio.” 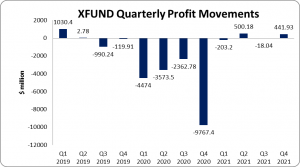