The company outlined that, “export sales continued to outpace increases in sales in the domestic market with an improvement of 27% over the same quarter in the previous year. Although small, particularly noteworthy was the increase in hotel size soaps of 87%.” In addition the company indicated that, “We are working closely with one of our partners to produce two brands of laundry soaps, a project which we hope will commence in October. These brands are not presently sold in the local market but have good sales in the export market. We have the capacity to efficiently produce the product and hope that the negotiations will be successfully completed in September.”

Other income, for the period totaled $1.14 million a significant decline when compared to the $6.35 million recorded for the same period last year.

Net Profit for the period totaled $38.48 million, a 3% increase compared to $37.4 million the prior financial year. 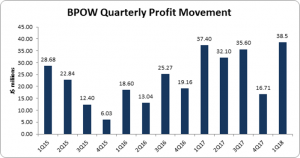