tTech Limited (tTech) for the nine months ended September 30, 2017: booked a 2% decline in operating revenues for the period to $163.63 million compared to $166.15 million for the corresponding period last year. Revenue for the quarter contracted 8% from $60.58 million in September 2016 to $55.80 million. According to tTech, “Revenues for our recurrent managed services increased over 2016 but we did not realize any major projects in this quarter which would have boosted our revenues”.

tTech noted, “A partner agreement with Loris Technologies signed recently. Loris is an established Canadian company that is the developer of the FileNexus cloud based enterprise workflow/document management system. Initial reviews of FileNexus from our existing customers have been favourable and we are working with Loris to prepare our launch strategy at the beginning of 2018. In the interim we will be offering the service to our existing customers as several have the need for this type of solution” 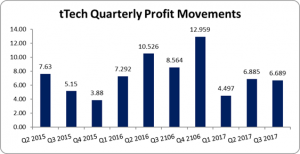