CPJ reported US$408,491 in net profit attributable to shareholders for first quarter of 2018FY

Caribbean Producers Jamaica Limited (CPJ) in United States dollars (except where it is indicated otherwise):

Revenues grew 15% year on year, to close the period at $24.30 million compared to the $21.05 million for the same period last year. According to the company “the increase was primarily driven by the growth in sales of our offshore subsidiary and targeted product categories in the local market.”

Cost of goods sold showed an 14% increase, closing the period at $17.76 million relative to $15.56 million for the same period last year.

Selling and distribution expenses were $5.02 million a 7% increase on the $4.67 million posted last year. According to the company “this was mainly due to the administrative costs relating to upgrade and strengthening of the IT infrastructure.”

Depreciation for the period declined by 8% closing the period at $607,235 (2016: $659.759) CPJ highlighted that this increase was “relating to the capital and operating assets of the company.

Other operating income totaled $13,407 this compares with the operating expenses of $14,671 booked a year ago. 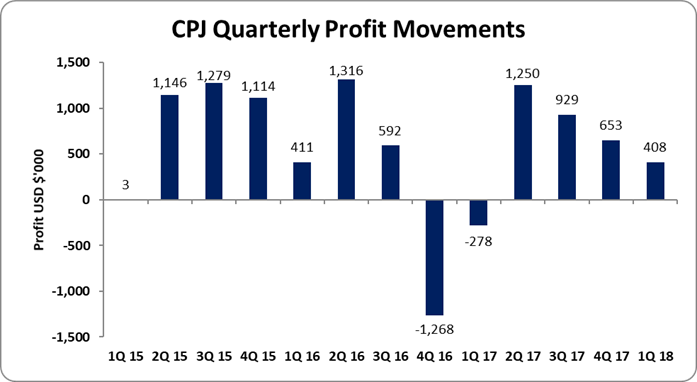