Consequently, net profit totalled $182.86 million compared to a loss of $43.83 million in the prior corresponding period.

The company highlighted that, the Company’s profit, “was positively impacted by a variation claim for 2019, plus a first quarter 2020 claim relating to the construction of Irvine Hall. Adjusting for both variation claims, the group recorded first quarter profit amounting to $33M. The claim for the full 2019 year is a one-off item, while the claim for 2020 is expected to occur each quarter of the current financial year.”

Notably, Management stated, “During the period under review 138 SL operated 1,460 world class rooms at its 4 locations on the UWI Mona Campus consisting of 1,692 beds. As part of its contribution to the welfare of students we offer 18 rooms, free of charge, to Resident Advisors who are charged by UWI to motivate students to participate in campus activities amongst other things. Average occupancy across all three Halls for the quarter was 99%. We expect this level of occupancy to continue up to May 2020 when the summer period begins. 138 SL operations are governed by the Concession Agreement which guarantees a minimum of 90% average occupancy throughout the year.” 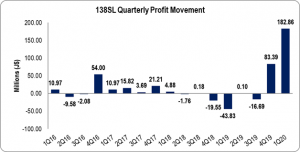