Seprod Limited (SEP) posted revenue totalling $34.35 billion compared to $22.50 billion recorded for the same period of the prior financial year, representing a 53% increase year over year. The Company stated, “This was driven primarily by the acquisition of the Facey Consumer Division in Q4 2018 and by an increase in the export business.” For the quarter, revenue climbed 22% closing at $9.55 billion relative to the $7.80 billion reported the prior year’s corresponding quarter.

Seprod reported net profit from continuing operations of $1.99 billion (2018: $1.5 billion), an increase of 34% year over year. Net profit attributable to shareholders amounted to $1.27 billion, 8% more than the $1.18 billion reported in 2018. For the quarter, net profit attributable to shareholders closed at $803 million (2018: $133.25 million). Seprod noted that, “The increase in profits from continuing operations was due in large part to efficiencies gained from internal reorganizations of the ingredients and the distribution businesses, and from the consolidation of the dairy business.”

The Company highlighted that “During 2019, Management executed on its previously communicated decision to close the sugar factory and, in so doing, curtail the ten (10) years of operational losses from sugar manufacturing. This move will positively impact the Group’s return on equity and its cashflows in the future. The losses from this discontinued operation (inclusive of redundancy payments and estimated impairment losses) amounted to J$814 million.” 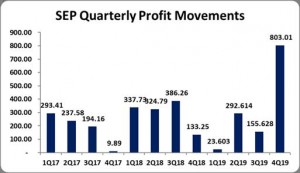