14 of 22 industry groups contributed to the overall U.S. Q2 GDP

The leading contributors to the uptick in U.S. economic growth in the second quarter of 2019 were professional, scientific, and technical services; real estate and rental and leasing; and mining. According to The U.S. Bureau of Economic Analysis (BEA), “14 of 22 industry groups contributed to the 2.0% increase in real GDP in the second quarter.”

For the professional, scientific, and technical services industry group, a 7.4% advance was realized in the second quarter, after increasing 8.0% in the first quarter. In addition, real estate and rental and leasing increased 2.6 %, after rising 0.80%  in the previous quarter. Specifically, increases were realized in other real estate, which includes offices of real estate agents and brokers. Mining hiked 23.5%, after climbing 26.0%. The second quarter growth primarily reflected a rise in oil and gas extraction. 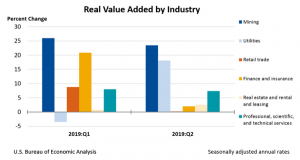 There was a 0.2% increase in Retail trade, after increasing 8.8%, and was the second leading contributor to the slowdown. The deceleration was primarily attributed to a slowdown in in other retail, which includes gasoline stations as well as building material and garden equipment and supplies dealers. Utilities climbed 18.1%, after  declining 3.5% in the first quarter. 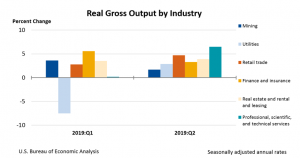