Other operating income increased in the first quarter of 2019 to $26.12 million. This compares to the prior year’s period figure of $17.14 million representing an increase of 52%.

The company’s year on year percentage change in total expenses was relatively unchanged. This was attributed to a 23% increase in other expenses to $8.85 million (2018: $7.17 million), tempered by a 27% decrease in administration expenses to total $4.47 million relative to $6.11 million booked in 2018.

Consequently, profit from operations for the first quarter of 2019 increased to $17.25 million from the prior year’s figure of $12.05 million representing a 43% increase.

Share of profit from interest in associate, net of tax of $1.84 million in the first quarter of 2019 similar to that of the prior year’s corresponding quarter.

Consequently, profit from operations before taxation amounted to $19.09 million for the first quarter of 2019 relative to $13.89 million recorded for the corresponding period in 2018. 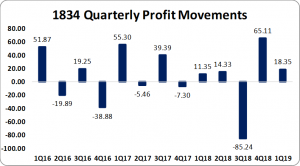