Operating expenses of $7.89 billion were reported for the period, approximately 14% more than the $6.92 billion booked for the same period in 2018. Of total operating expenses; distribution costs totalled $1.42 billion (2018: $1.32 billion), while administration and other expenses totalled $6.48 billion (2018: $5.60 billion), a 16% increase year over year. Operating expense for the quarter closed at $2.76 billion, up from $2.34 billion reported for the third quarter ended January 31, 2018. The company noted, “These results also include the operating expenses of the new hatchery in Pennsylvania and the costs associated with the formation of the Shareholders’ Trust – these costs were not in last year’s comparative results”.

JBG reported finance income of $328.41 million compared to a finance loss of income of $43.24 million for the prior year.

Taxation for the period increased by 35% to total $408.24 million relative to $301.64 million. Consequently, Net Profit for the nine months period remained flat year on year to total $1.41 billion relative to $1.41 billion reported for the corresponding period ended January 2018. For the quarter, the company reported net profit of $762.87 million, a 2% increase relative to the $749.07 million reported for the comparable quarter in 2018. 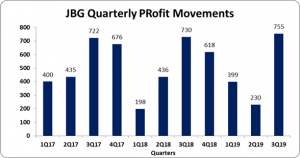