Kingston Wharves Limited (KW) for the three ended March 31, 2019 reported total revenue of $1.83 billion, a 12% increase relative to the $1.63 billion recorded for the corresponding period in 2018.

The company noted, “The Terminal Operations division generated operating revenue of $1,455 million for the three-month period, an increase of 9% over the corresponding period of the prior year. Divisional profits increased by 37% from $385 million to $527 million year on year. The positive start to 2019 is a direct result of strategic investments in key areas of our terminal facilities and operations, which continue to positively impact our efficiency and profitability. Our Logistics Services division continues to experience strong and steady growth. This division generated revenues of $498 million, an increase of 26% over the prior year. The main drivers in this business segment continue to be our automotive logistics, warehousing, distribution, and freight-handling services targeting commercial, industrial and personal-effects clients. KWL’s growth strategy of product diversification, timely capital investments in modern warehousing and cargo storage infrastructure and technology, and human resource development, have been critical to the success of the division. Also, critical to our growth has been ongoing measures to improve customer service delivery. The division generated first quarter operating profits of $148 million, a 78% increase over the prior year.”

Administrative Expenses for the period declined by 2%, amounting to $295.33 million from the $300.15 million recorded for the same period last year.

Finance Costs for the period declined 21% total $47.59 million relative $59.87 million recorded for the same period in 2018. The company also booked Share of results in associated company of $120,000 relative to nil the prior year.

Taxation charges amounted to $106.0 million for the period, a 69% increase relative to the charges of $62.83 million incurred for same period last year.

Notwithstanding, Net Profits for the period rose by approximately 23% to total $458.55 million relative to $374.04 million recorded for the corresponding period in 2018.

Net Profits attributable to shareholders rose by approximately 23% to total $452.61 million relative to $368.47 million recorded for the corresponding period in 2018.

Additionally, KW noted, “The first quarter of 2019 reflected the momentum of our solid performance. Over the coming months, we will seek to maintain our profitability and consolidate our position as leaders in the regional terminal and logistics marketplace.” 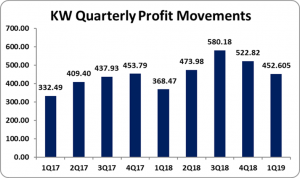