Sweet River Abattoir & Supplies Company Limited (SRA) for the year ended March 31, 2019 recorded a 19% decline in revenue to $245.12 million relative to $304.41 million in the same period in 2018. Revenue for the quarter went down 28% to close at $46.60 million relative to $64.99 million in the prior comparable period. The Company stated that, “this decrease was due to a reduction in the amount of pigs slaughtered during the quarter based on the Company’s indebtedness to pig farmers.”

SRA mentioned that, “sales were lower in 2019 as a result of us slaughtering fewer animals while some costs remain unchanged. The entry of a new processor combined with an attrition of farmers resulted in less pigs available and thus higher pig price. These higher price most time cannot be passed on immediately due to contractual arrangements.”

Additionally, management stated that, “while our performance in 2019 is better than that of 2018 we operated at a loss and corrective measures are being looked at to address the challenges. One measure being contemplated is for the company to acquire a finishing barn and grow pigs to cover for shortfalls in the market. Another measure is to have selected farmers grow on exclusive contract where some raw materials are provided by the Company.” 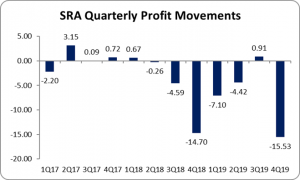