In 2017, machinery and transport equipment, other manufactured goods and chemicals represented the main categories of product traded by the EU; however, the share of EU trades that go to these countries (U.S and China) varies overtime. After recording a significant and almost continuous fall until 2011, the share of the United States in EU total trade in goods had increased to nearly 18% in 2015 and 2016, before decreasing again slightly in 2017. The share of China has almost tripled since 2000, rising from 5.5% to 15.3% in 2017. 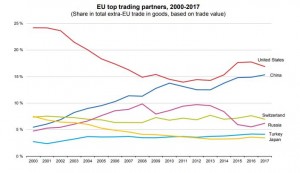