AFS noted, “The results for this quarter reflect the continuing impact of COVID-19 on our business, as we see tepid loan disbursements and higher levels of delinquency”

Furthermore, management stated, “Loan disbursements for Access were affected by the reduction in economic activity, however it has since improved with the relaxation of the restrictions implemented by the Government during June 2020. Our operations in Florida, Embassy Loans Inc. (Embassy Loans) also experienced lower disbursement due to reduced economic activity and the stimulus packages offered by the US Government.”

As at June 30, 2020, the company’s assets totalled $5.79 billion, up 8% from $5.37 billion in 2019. This increase was largely attributable to ‘Cash and Cash Equivalents’ which amounted to approximately $857.52 million 62% more than $530.51 million in 2019. Management noted, “Given the ongoing assessment of the economic fallout and uncertainty surrounding the length of time the pandemic will persist, we are currently are maintaining an increased level of liquidity reflected in the Cash and Cash Equivalents amount of $858 million as at the period end.” 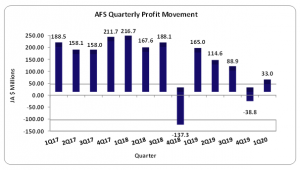