Furthermore, Eurostat noted, in the third quarter of 2020, the annual changes were an increase of 2.2% for wages & salaries and a decrease of 0.3% for the non-wage component, while in the EU wages & salaries rose by 2.4% and non-wages component remain unchanged. 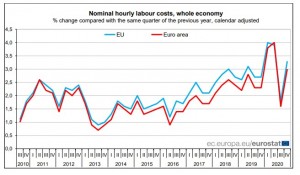