Annual Growth in Labour Costs at 2.2% in Euro Area

According to Eurostat, the statistical office of the European Union, “Hourly labour costs rose by 2.2% in the Euro Area (EA19) and by 2.9% in the EU28 in the second quarter compared with the same quarter of the previous year. In the first quarter of 201, hourly labour costs increased by 2.1% and 2.8%, respectively.”

In addition, the two main components of labour costs are wages & salaries and non-wage costs. There was a 1.9% growth in the cost of wage and salaries per hour, in the Euro Area, and non-wage component grew by 2.9% in the second quarter of 2018 compared with the same quarter of the prior year. However, in the first quarter of 2018, annual charges were 2.7% and 3.1%, respectively. 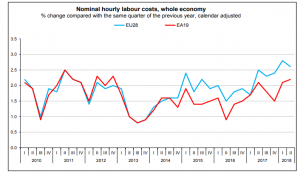 When the second quarter of 2018 was compared with the same quarter of the prior year, hourly labour costs in the Euro Area rose by 2.2% in industry, by 2.7% in construction, by 2.5% in services and by 1.5% in the mainly non-business economy.